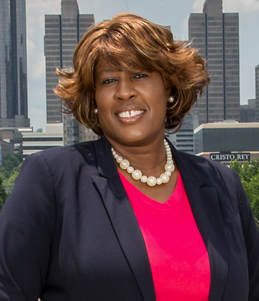 When the real estate market began to crash in late 2007, she expanded her real estate brokerage firm to include property management. As a property manager, it became clear that Angela would need a competent team of contractors to fulfill the high demand of repairs for properties.  In 2012, she established a property maintenance company providing basic maintenance and repair services for residential and commercial property owners.

In December 2015, Angela committed to pursue a career within the construction industry as a general  contracting firm. She steadfastly began developing a team of experts, earning certifications and designations within residential and commercial construction.  She focused on being among the "who's who" in commercial construction and learning everything she could absorb. She studied the successful women owned construction firms and their leadership.  Then in late 2016, Angela had the opportunity to meet a woman whom she admired with high regard, Nancy Juneau, CEO of Juneau Construction. Soon after meeting with Nancy, Angela became a Mentee of Nancy.  With the inspiration and wisdom shared by Nancy, Angela became even more focused and determined to endeavor the construction business as a successful entrepreneur.

While Construction had not been a career desire for Angela, the choice to welcome the responsibilities of construction came natural for her. She's never afraid to undertake a leading role and enjoys bringing teams together for the common cause of successful projects.  With a sincere love of the construction industry, Angela R. Brown is dedicated to becoming one of the most reliable names within the construction service industry. Eager to earn the business of clients abroad, she engages in ongoing training, safety implementation, team building, and advanced technology in construction, and focuses on the integrity of Angela R. Brown Construction, LLC.

Angela is a Georgia licensed Resident Insurance Adjuster. She is also an experienced Insurance Appraiser and Insurance Umpire.
​
She is the mother of four boys. She enjoys traveling and meeting other entrepreneurs.  She is an active member of the National Association of Women In Construction. She is also a member of Toastmasters International in Atlanta, GA.